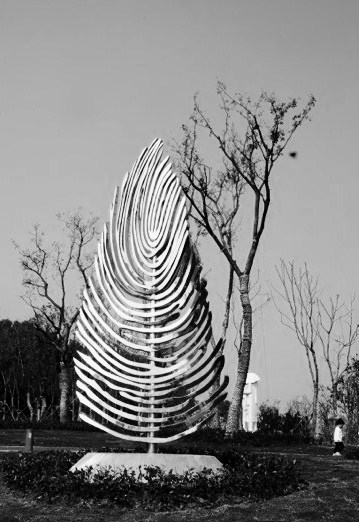 By superadmin May 12, 2012 Latest News
No Comments

Excerpt from the News coverage:
The international sculpture exhibition opened in Wuhu on October 27, 2012. Exhibits were chosen from more than 2100 proposals by 553 artists all over the world.
The 43 sculptures, including 8 by international artists, were also winners of the Second Liu Kaiqu Awards named after Liu Kaiqu (1904-1994), a
sculpture doyen in contemporary China. The awarded pieces, including the monumental sculptures by Jorge Elizondo, Peter Jacobi and
Ralfonso who are invited by honor therefore not eligible for prizes, also constituted the second Liu Kaiqu Award International Sculpture Exhibition
jointly sponsored by the China Sculpture Institute, China Academy of Art and Wuhu City Government. The opening is followed by “Space and Quality: the Second China Sculpture Forum”.The Liu Kaiqu Awards program will go on in Wuhu to build a top level international sculpture park in
next 10 years.

The MAGIC TREE is a Ralfonso kinetic wind sculpture design which tells the story of how the first Human touched the first Tree. It interprets and celebrates the Uniqueness of each of us Human Beings and the Uniqueness of all Nature around us!
There are 8 billion people on earth, – each and every person has a fingerprint, but miraculously they are never the same!
Just like every single living Tree on this earth is unique and different from the next, so we Humans are truly “one of a kind” individual people, each with our own story, our own journey to take, and our own decisions to make.

The MAGIC TREE story begins at the beginning of time, when Hominidus, the first young Human actually first touched Arborea, the first young Tree. It was the very first time on earth, that two individual, living beings connected. Much was shared then, – and a great friendship begun.
Arborea, our young first Tree, was so happy by the first Human Touch, that she grew her branches in form of the Fingerprint of Hominidus.
When Hominidus saw his own fingerprint in the growing branches, he was so thankful, that he began to plant a beautiful garden and many more trees around Arborea and promised her to always take good care of Nature.
My MAGIC TREE celebrates Mankind’s close friendship with Nature, and the Very Uniqueness of all Living Things.
THE END

Any cookies that may not be particularly necessary for the website to function and is used specifically to collect user personal data via analytics, ads, other embedded contents are termed as non-necessary cookies. It is mandatory to procure user consent prior to running these cookies on your website.